The complete guide to men's belt which you never read

Belts are worn for both function and style. A seemingly small accessory, they can have a surprisingly large impact on the impression you make. They can be a piece that pulls an outfit together, or end up becoming a distraction that sabotages its overall effect.

Unfortunately, many men don’t know anything about belts, besides the fact that they go around their waist.

So today we’ll talk about when to wear one, the different types, when to choose one kind over another, and how to buy a quality belt that fits you right.

This is a man’s complete guide to belts.

What Is a Belt?

Let’s start by defining what we’re talking about.

A belt is a cinching system that goes around the waist using tension to hold up a person’s pants. Even a piece of string can be a belt!

A belt can be used for carrying things. Look at Batman and his utility belt, or a gentleman who decides to conceal carry.

However, most belts are purely decorative.

Simple. Now let’s start getting into more of the details of belts.

Anatomy of a Belt 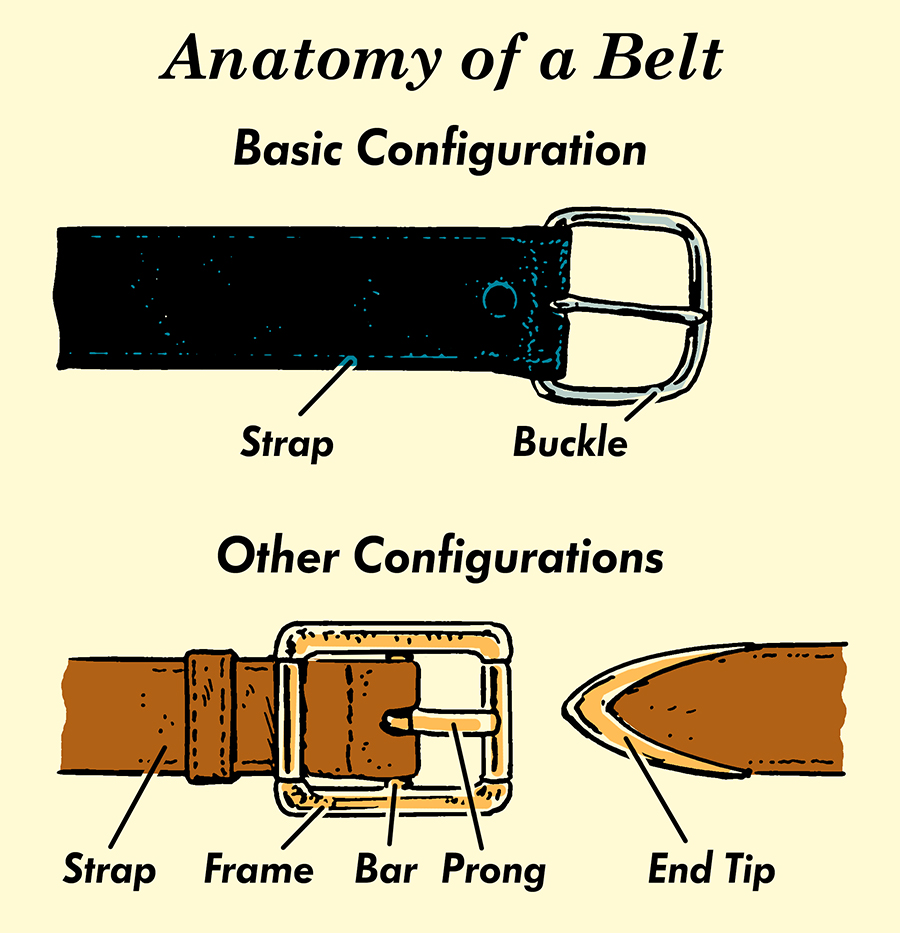 The vast majority of belts (once you’ve moved beyond the simple string) have two parts: the buckle and the strap.

Many belts also have a keeper loop and/or an end tip (the end tip is usually metal, or leather on cloth belts). The end tip protects the end of the belt from being damaged/frayed and can make it easier to buckle. After the belt is buckled, the keeper loop stops the free end from flapping around.

In some belts, the strap and buckle are permanently joined together; in others, they can be taken apart and the buckle switched out. The part of the buckle that joins it to the strap is called the chape.

When Should You Wear a Belt?

In general, you should wear a belt with all pants (including jeans) that have belt loops. That’s what the loops are for! Leaving it off can look sloppy. Certainly with formal outfits, when your shirt is invariably tucked in, belts are essential. With more casual get-ups, when you’ll be wearing your shirt untucked, you can get away with skipping a belt, but you may still miss its functionality; remember that belts aren’t purely decorative — they help keep your pants up!

To maintain this function in the absence of a belt, you can choose suspenders as a stylish and fun alternative. Suspenders are a great way of dressing well for larger men — they’ll hold up your pants more effectively and reduce bulk at the waist. They also make a short guy look taller (or at least, they don’t make you look shorter by breaking the line of your body the way belts do.)

The one thing you don’t want to do is wear a belt and suspenders; it looks as if you either don’t know what you’re doing, or are just really, really worried about your pants falling down.

Belts can roughly be sorted into two categories: formal and casual. Let’s dig into how these belts differ, and how to wear each type well. 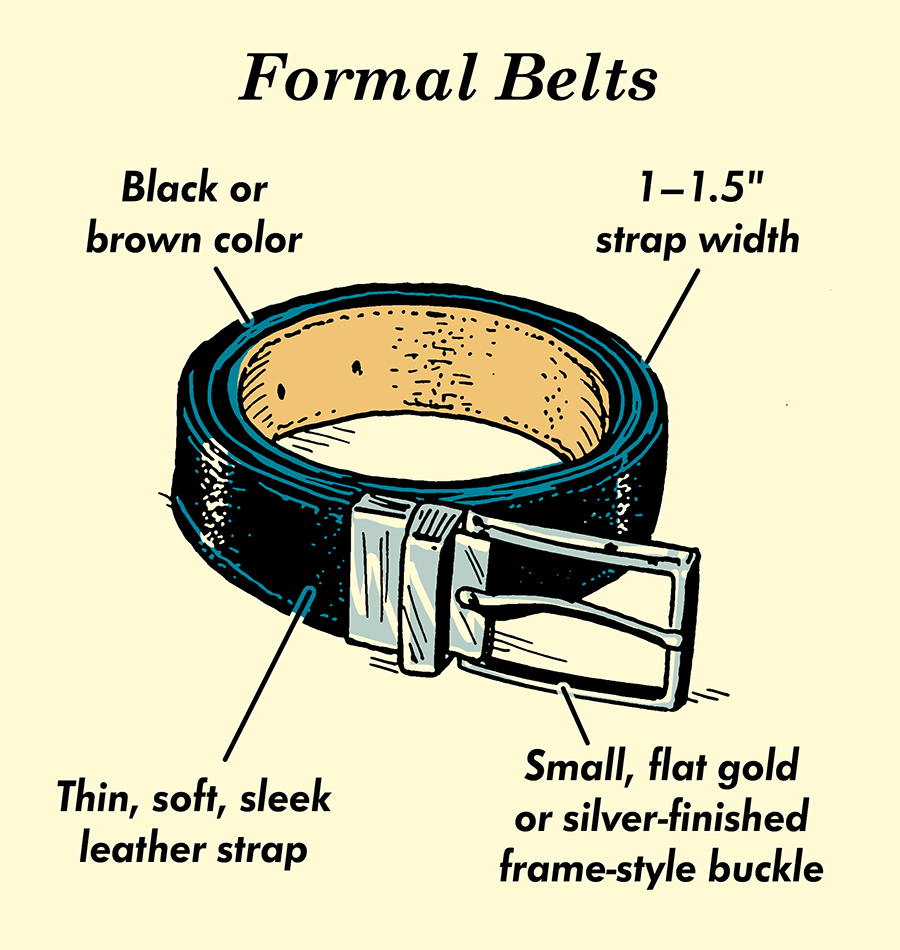 Formal belts don’t differ much from each other and share certain characteristics without many exceptions.

Almost all formal belts include a frame-style style buckle, in which the strap goes through the frame. The prong of the buckle goes through holes in the strap to fasten the belt.

The buckle of a dress belt is usually shiny and sleek, gold or silver in color, and smaller and flatter than those found on casual belts.

A dress belt should be 1-1.5 inches wide, with thinner belts being more formal. A belt on the 1” end of things is suited for a smaller man, with a waist under 34”.

Leather is the only suitable material for dress belts (or a really good imitation leather if you’re vegetarian).

Cowhide. The most common leather used for belts, and comes in a few variations: full-grain leather is the best looking and most hardwearing, while calfskin is the softest and most supple. The highest quality formal belts will be full-grain calfskin.

Ostrich, lizard, crocodile, and alligator. These skins are all technically more casual belt materials, but can work as formal in a dark color.

Ostrich belts are a bold look, dotted with pockmarks from the feathers. They tend to fetch a high price.

Crocodile and alligator belts are even more upscale and have a subtler pattern and texture.

Faux leather is made with polyurethane on a fabric backing. It’s durable and low-maintenance, and the best faux leathers look realistic, although they don’t develop the same patina as real leather. Cheap fake leather looks, well, cheap and fake.

A formal belt should be a subtle and understated addition to one’s outfit. Its surface should be solid and smooth, often with a sheen, and only have a subtle pattern at most. Black and brown are the most traditional colors for dress belts; some other colors you might see towards the smart-casual end of formal belts are oxblood, tan, navy, gray, and white for summer.

Matching a Formal Belt with Your Outfit 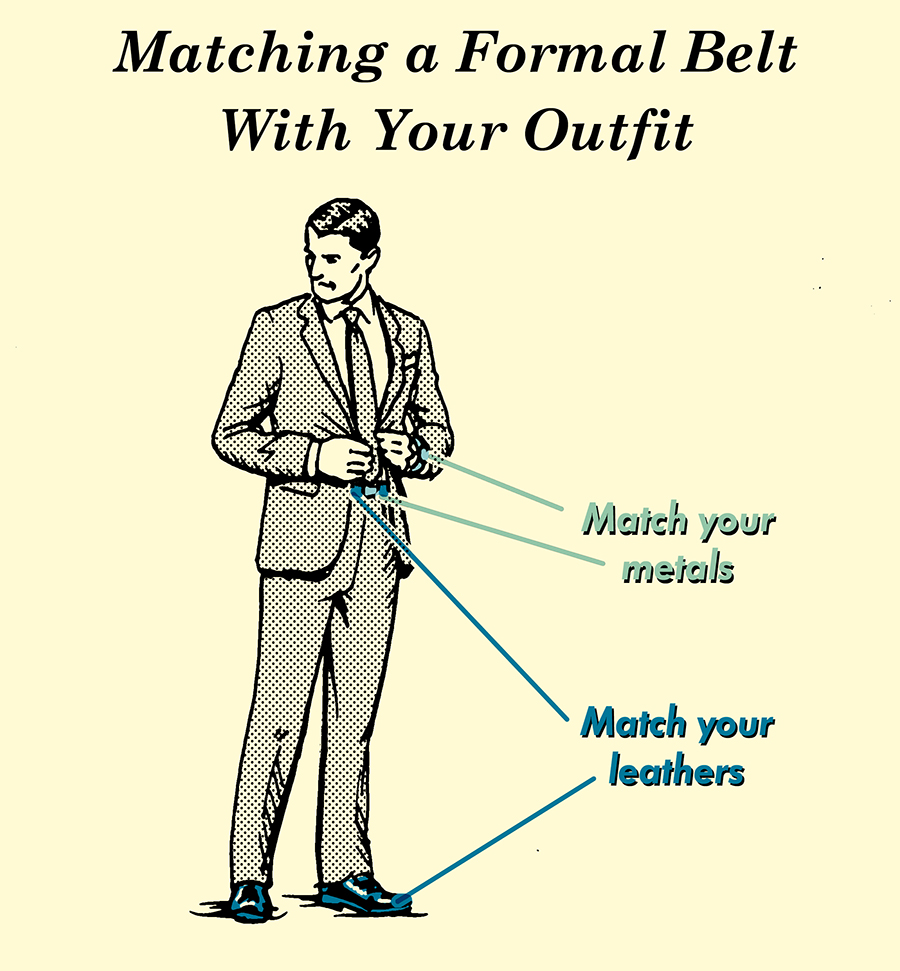 When you’re wearing a formal belt, be careful to match your leathers and match your metals: the strap of your belt should not only be the same color but also the same level of shininess as your shoes and other leather accessories, and the buckle should be the same color as your other metal jewelry and accessories (with the exception of your wedding ring, which can contrast with the other metals you wear). 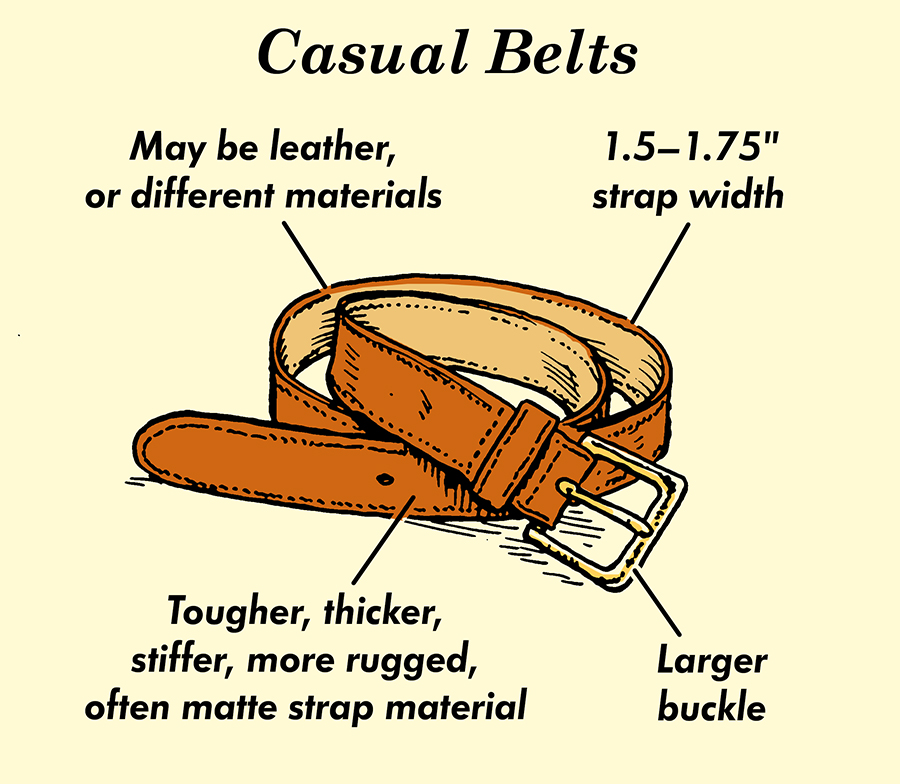 Casual belts come in many more types, styles, and colors than formal belts, and can be used to show more of your personality and individual style. 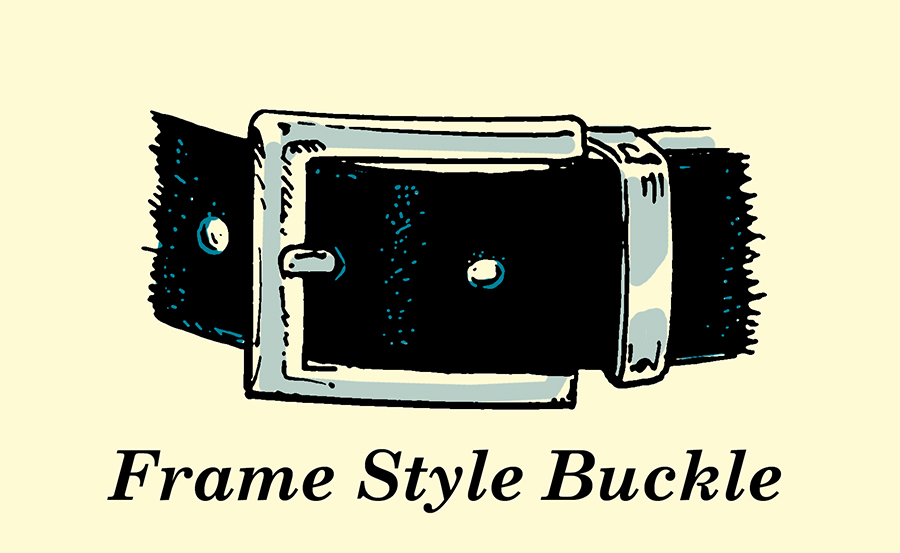 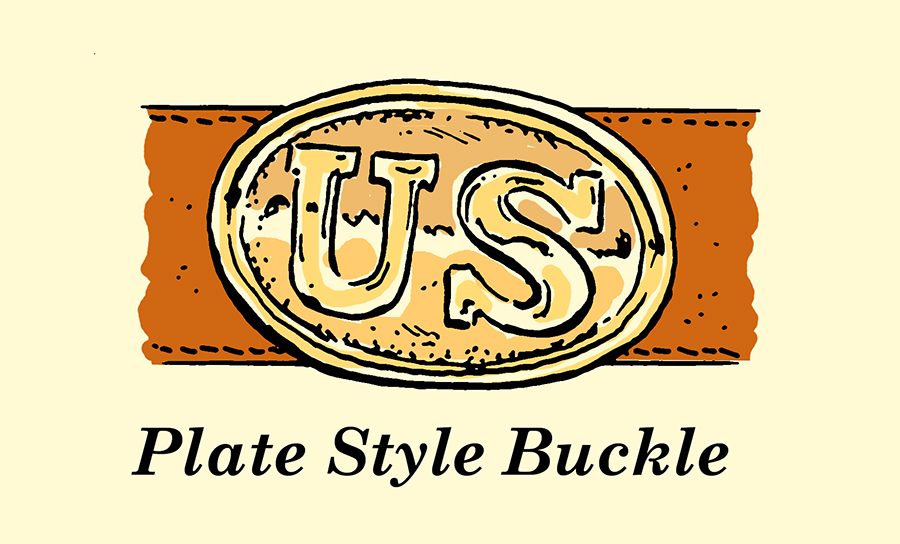 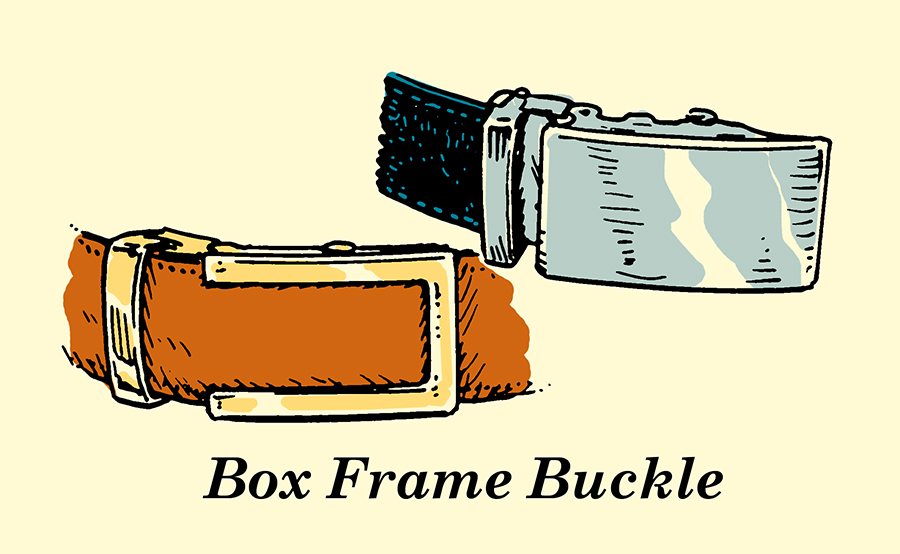 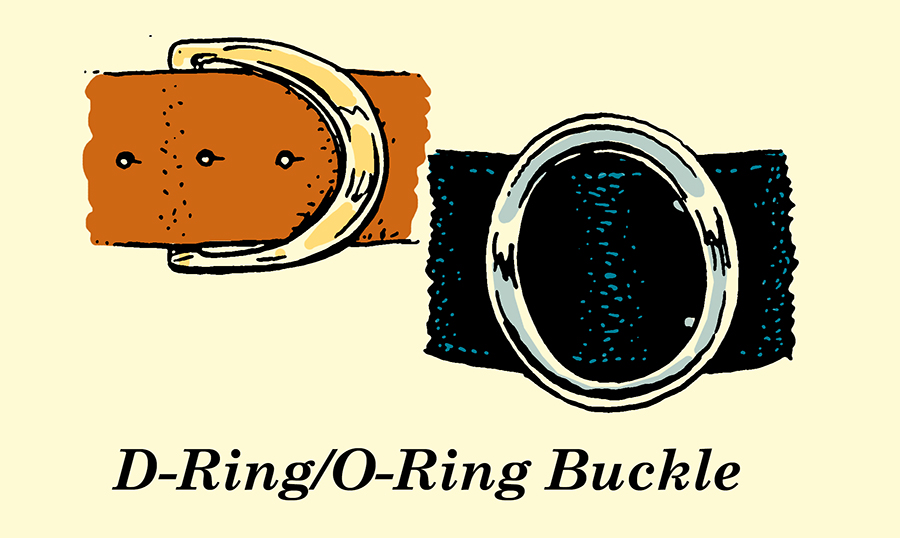 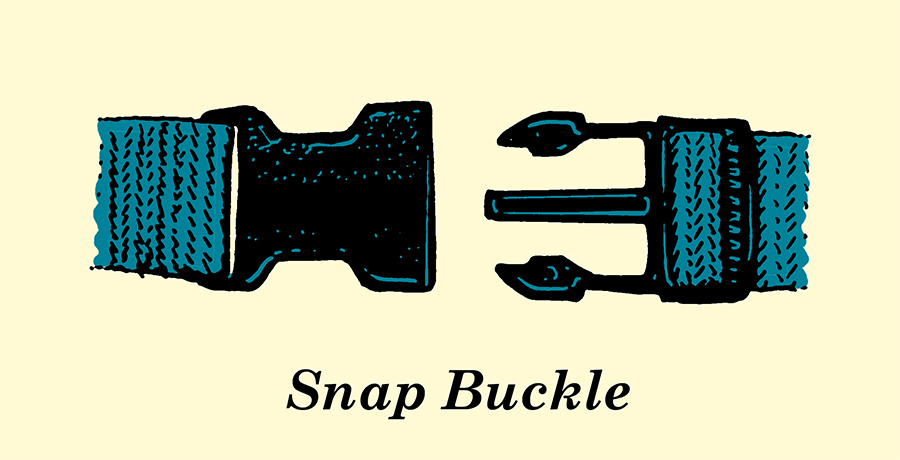 A casual belt will be 1.5-1.75 inches in width, with wider being more casual. A belt around 1.5” in width goes well with denim, chinos, and heavier fabrics. A belt wider than that is more unusual, suits jeans and casual trousers, and can be paired with classic and “statement” buckles.

Full-grain leather. Broader, tougher, and stiffer than leather dress belts, leather casual work belts are usually made from the outer layers of a cow’s hide. Some even include marks from scars or brands that the cow acquired during its life.

Braided leather. Used with a frame-style buckle to make very adjustable belts: you can put the prong in any hole in the braid. Braided belts are a good option when you want to keep things simple and unobtrusive; they add a little texture without making an overwhelming statement. They’re also easy to find, and often quite cheap.

More casual than a flat strip of leather, braided belts should not be worn with suits, but can work with a sports jacket.

Multicolored braided belts are even more casual, and are sometimes worn with summer ensembles for an east-coast prep look: khaki shorts, a light polo or button-fronted short-sleeved shirt, and boaters, with the bright belt holding down the center of the image.

Tooled leather. Decorated by “tooling,” a stamping process that leaves patterns on the leather, which are often then stained to make them stand out. Most are designed for interchangeable buckles.

Tooled belts work well with simple outfits, such as a pair of jeans and a basic button-down shirt. As they tend to be visually “busy” pieces on their own, the look starts to get overwhelming if you pair them with too many other patterned/textured items.

Leather-backed ribbon. A casual material that allows you to stand out with bright colors and bold motifs. These are usually paired with a frame buckle. Leatherback ribbon belts go perfectly with sailing, golf, and boat shoes.

Canvas. A staple of uniforms from the Army to the Boy Scouts, canvas belts with metal buckles are a plain, functional style. Most have a flat box buckle containing a sliding peg, which pins the strap in place at the desired position.

The most common styles of canvas belt are plain monochrome and monochrome with a single contrasting stripe running horizontally around the middle of the belt. Both have been in men’s casual wardrobes for the better part of a century.

Webbing. Another functional material, good for outdoor pursuits. It can be found in fun colors and patterns, and most often comes with a D-ring buckle.

Rope. Mostly a women’s fashion, but worn by men in nautical circles. Often fastened with a knot and loop rather than a buckle, they’re a bit preppy but durable and easy to clean, and can take a soaking better than leather.

Brown is the most popular and versatile color for casual leather belts; black belts don’t pair well with jeans and khakis. With casual non-leather belts, colors can really run the gamut to every kind of pattern and hue.

A big consideration to make when wearing a casual belt is whether you want it to be an accent piece or a centerpiece.

An accent piece is subtle, low-key, and complements the rest of your outfit. It’s usually in coordinating or neutral colors.

A centerpiece demands attention, and contrasts with the rest of your outfit.

While dress belts are pretty much always accent pieces, casual belts can be accent orcenterpiece accessories.

There’s nothing wrong with either approach. You just want to dress appropriately for the effect you want.

A good accent belt should share some of the characteristics of the other pieces in your outfit. Similar or matching colors is an obvious choice, and how most men generally select their belts and shoes. A casual belt should still match your metals, but you’ve got more leeway on the leathers — brown with tan or tan with white is fine. Of course with casual outfits, you’re often not wearing leather at all — either in your shoes or in your belt. You don’t need to match the color of a casual belt of leather, or any other material, with the color of canvas/cloth sneakers. Just let the color of the belt work with your overall get-up; when in doubt, go with brown.

Centerpiece belts, on the other hand, are there to provide deliberate contrast, and provide a sharp, divergent punch of color or style compared with the rest of your get-up. They work best when the rest of the outfit isn’t too filled with colors and patterns. One or two bright elements are enough — more just looks too gaudy and busy.

Keep in mind that you don’t want to wear an eye-catching statement belt if you’re not confident about drawing attention to your waist!